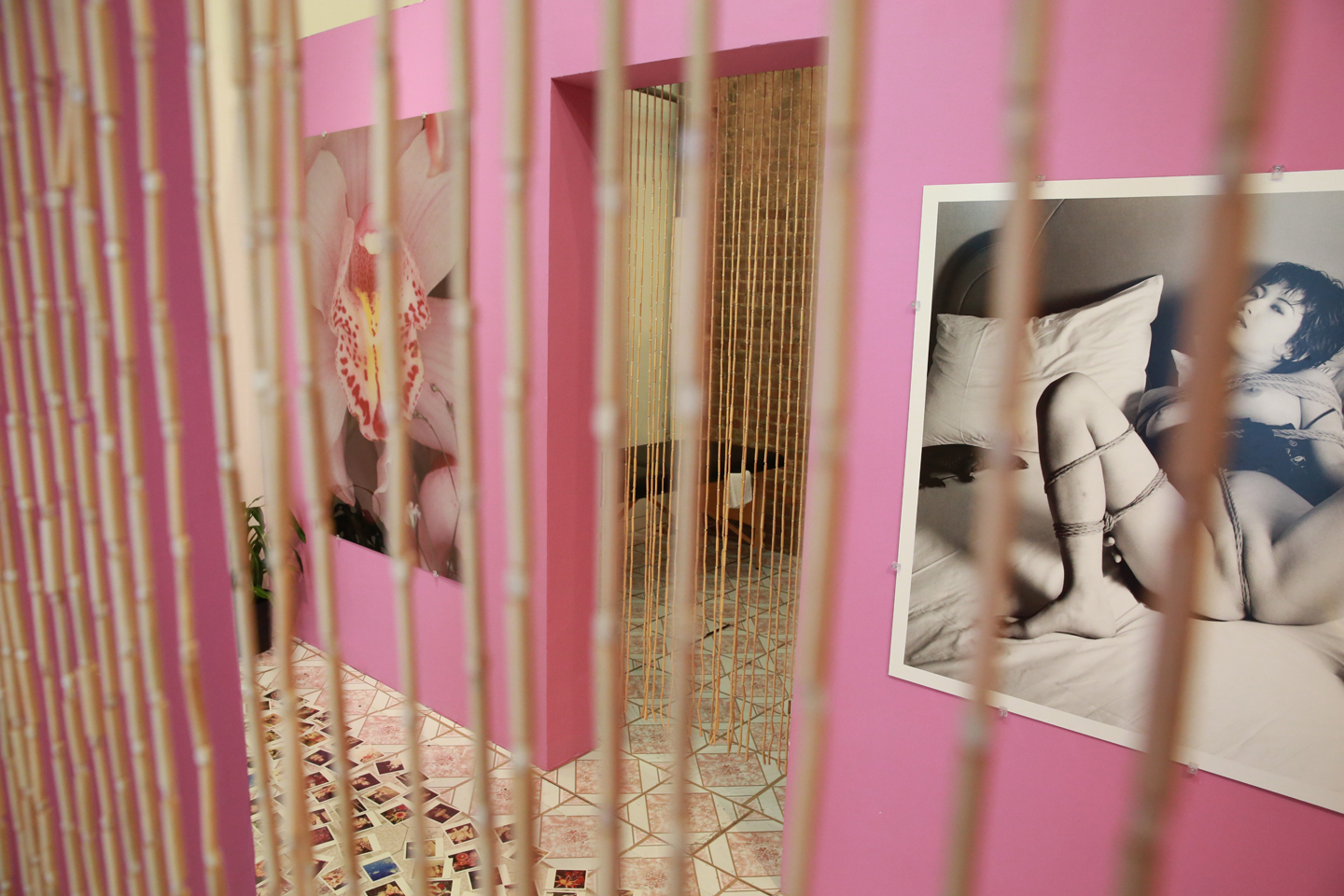 “The aim of art is to represent not the outward appearance of things, but their inward significance.” -Aristotle 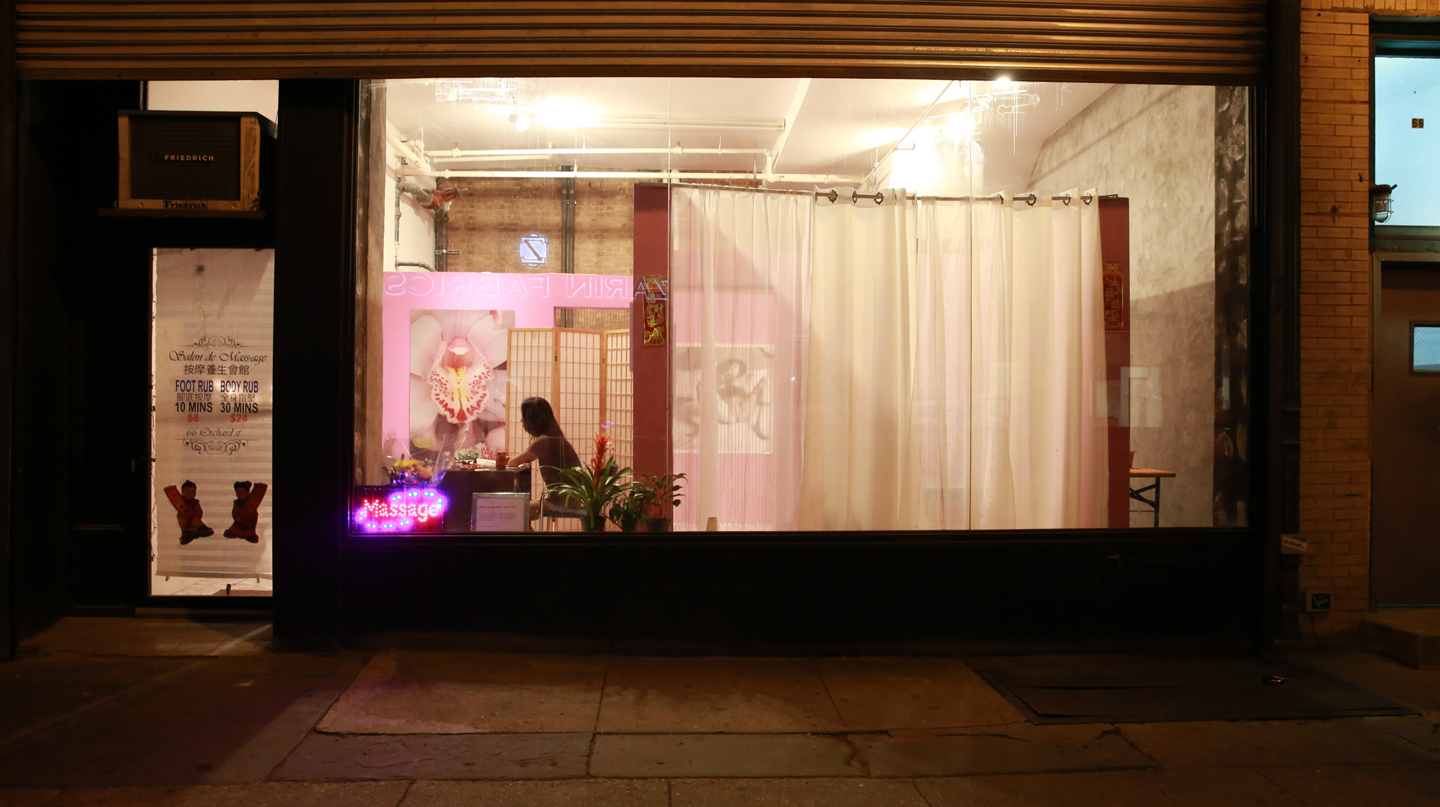 Sex is a loaded term, but perhaps sex positivity is an even more incendiary and culture-clashingly raucous expression. Depending on whom you ask, attitudes about sex can widely range in the gamut of beautiful and sacred to shameful and taboo. As disparate as these outlooks are, sex is uncontestably a basic, integral facet of human nature. So why do we shy away from it and keep it behind closed doors? 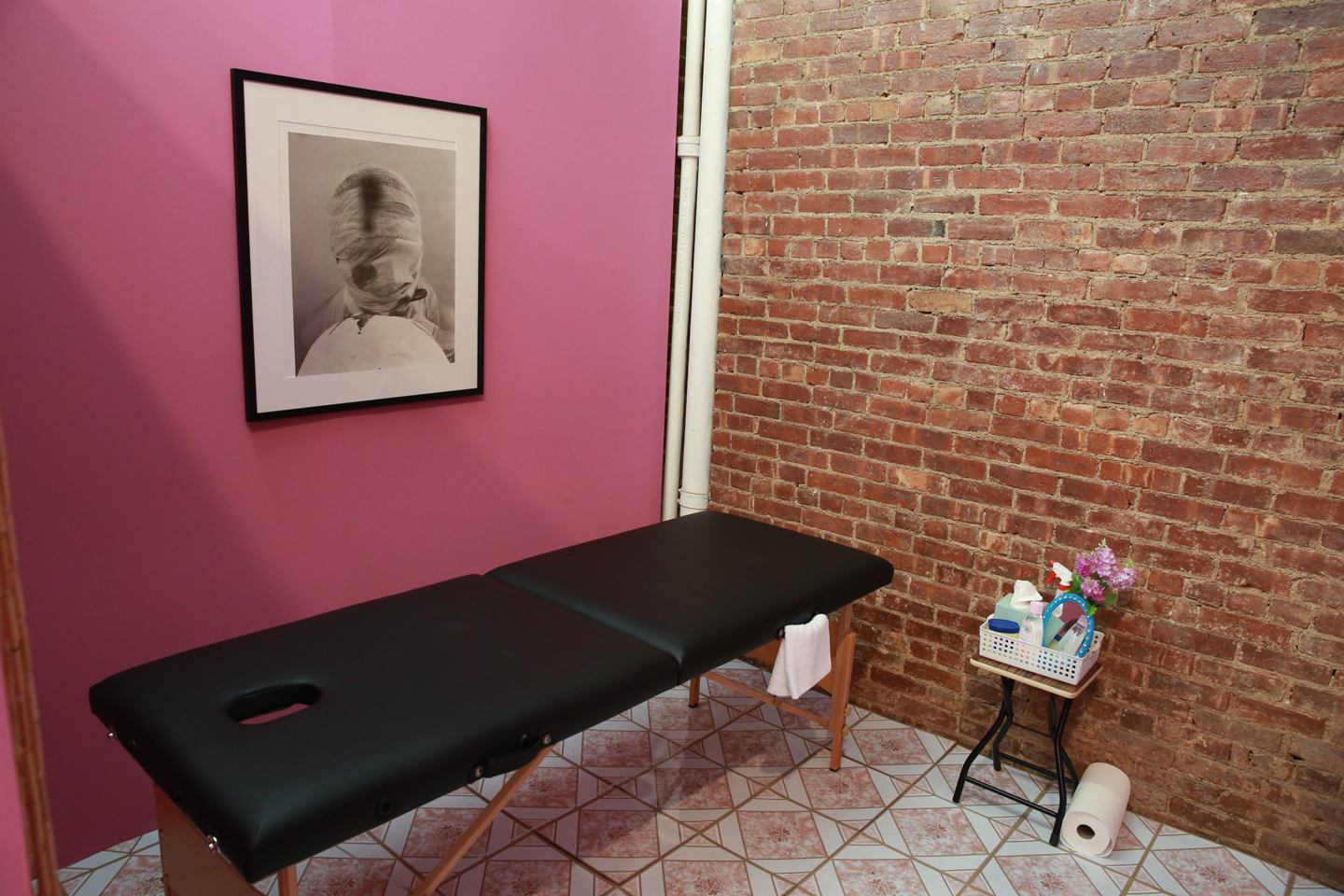 Salon de Mass-age is the current exhibition in 66 Orchard, setting the framework for the photographs of Nobuyoshi Araki and Rudolf Schwartzkogler in a pseudo massage parlor and casting light on an alternative narrative between pleasure and guilt. The guise of a massage parlor is ingenious in that it plays on a historically known euphemism and turns it on its head (sometimes to the disappointment of desiderate men.) The fine line between art and pornography is blurred, but also highlighted, as the true identity of 66 Orchard is a gallery space owned by Shin Galllery just around the corner on Grand Street. Despite the shanty storefront, garish neon sign, disheveled linoleum tile floor, and cheap curtains, the air of erotic business is enough incentive for some to enter and inquire about a massage. It is the proverbial melding of highbrow and lowbrow culture, tugging at carnal desires, yet doling out a different type of reward. 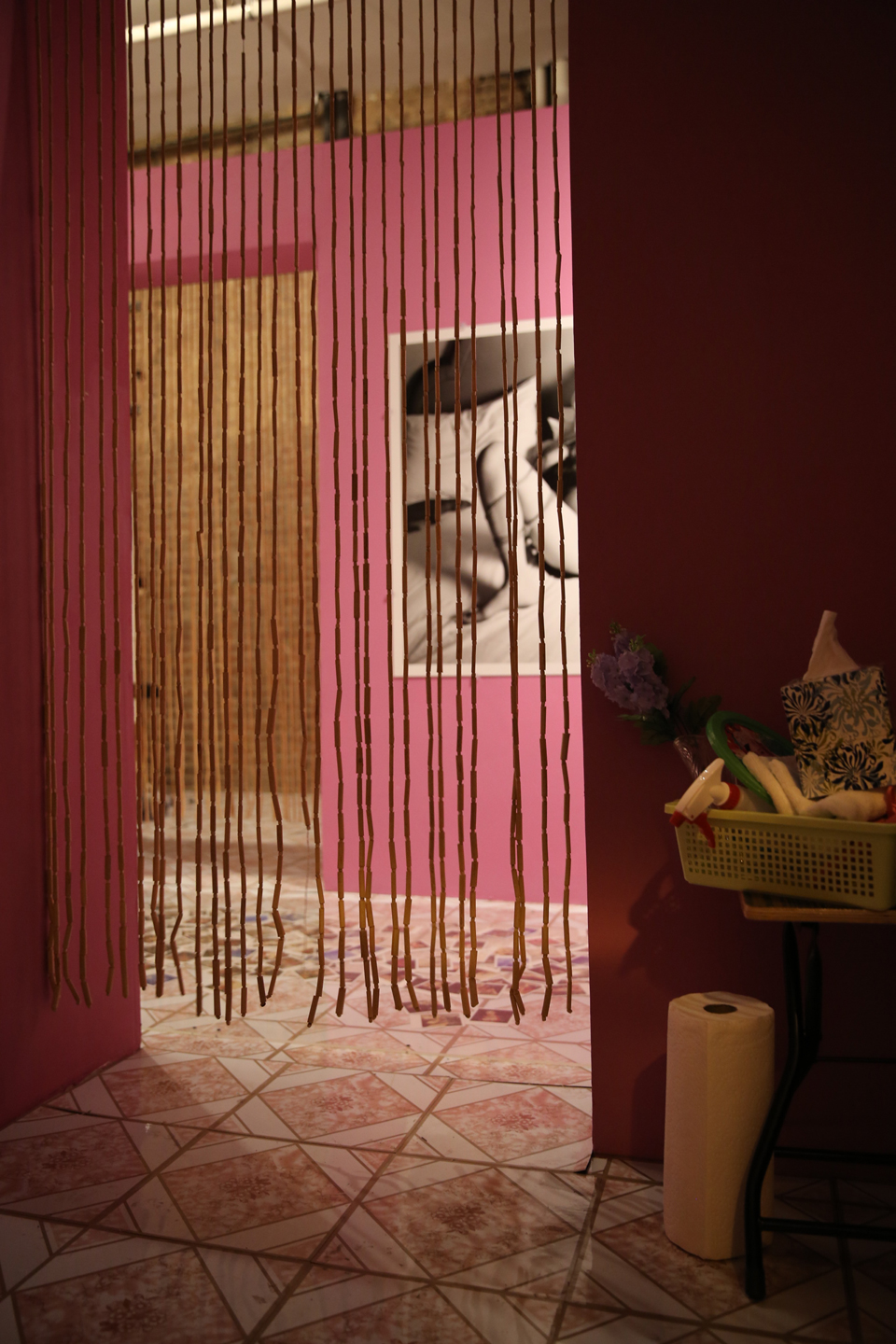 This installation is unique in that the gallery space creates an unusual context for the work, cultivating an underlying theme and relationship between the two artists. Rather than placating the provocative photography against standard white walls, 66 Orchard amplifies their essence into a physical environment. These photos are littered on the floor and blown up on the walls. Savvy visitors will no doubt recognize Araki’s overtly sexual style, whose work is diametrically opposed to Schwarzkogler’s in tone, yet 66 Orchard’s machinations seek to compare rather than contrast. 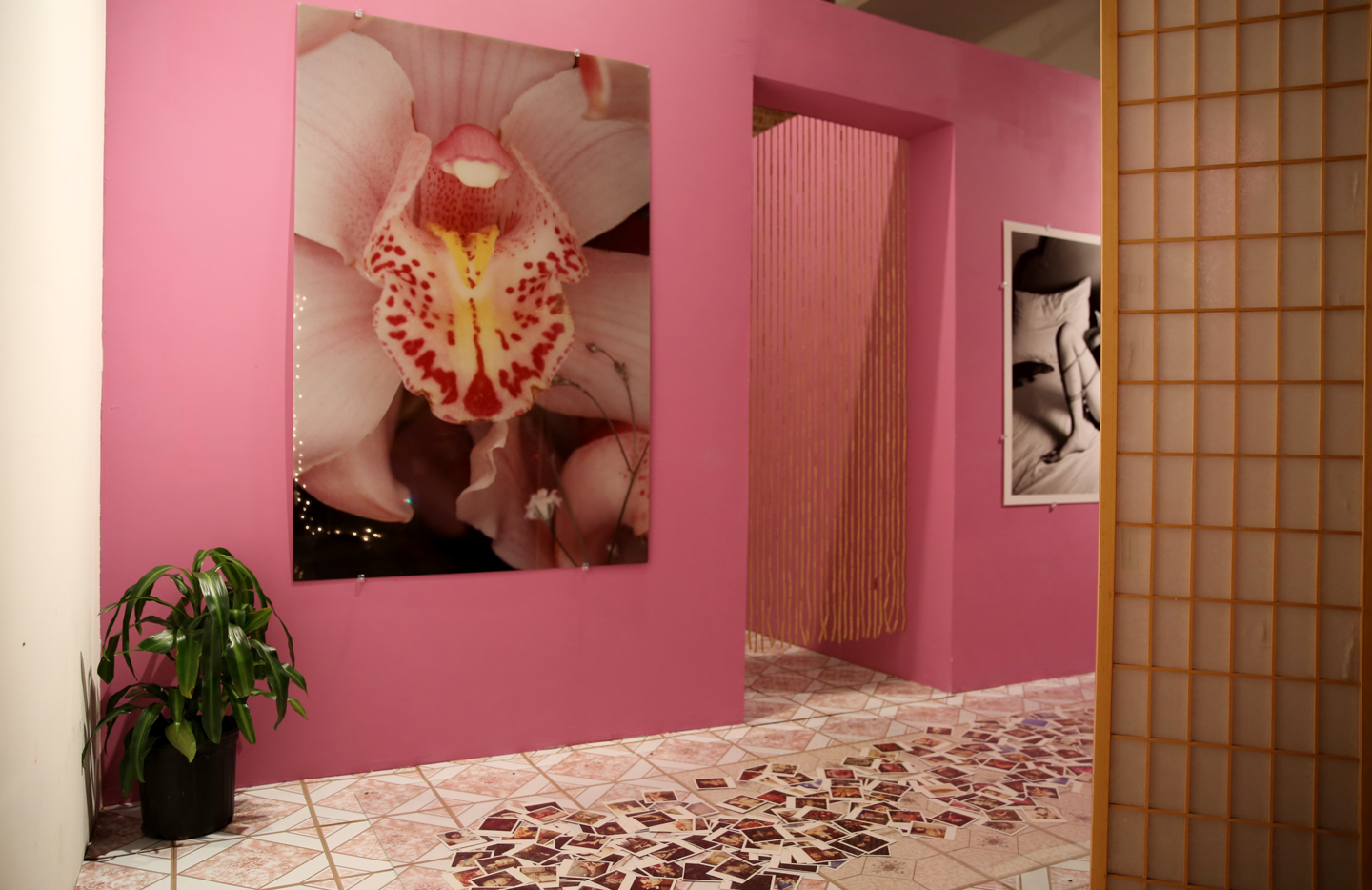 Juxtaposed, there is concurrent note of bodily vulnerability between their subjects, in bondage and in bandage. The convergence of their photography is a visual display of sexuality that is simultaneously soft and extreme. Araki’s subjects are adorned in geisha- type garments and portrayed in bondage scenarios with expressions ranging from innocence to wanting and from daring and to jaded– playing into the fetishized role and fantasy of submission implicit within eroticism. Schwarzkogler’s figures mirror the bold nakedness of Araki’s women, but their motif does not hinge as pervasively sexual.

Instead, they incisively accentuate the physical vulnerability of the body. The methodology of these two artists’ work playing off each other is so clever it seems almost obvious. The women relegated to their sexual utility and the male mantra of strength and outward resilience is reinforced. This huge bombardment of such raw and brazen exposure emphasizes the sexual in unabashed form, but also aims to recognize the distinctively gendered culture of our society. That a massage parlor is the natural meeting place of the two artist’s catalogue is fresh twist on the way we observe art. 66 Orchard is a beautifully creative presentation and a thoughtful example of the gritty and socially taboo conventions about sex. There is no shying away from this one.